Unreal Engine and Unity are the main tools of the trade when it comes to making the vast majority of video games these days, at least when referring to anything in the mainstream realm of video games. However, the central coding building block languages are equally valid avenues to explore when looking to create an experience that can be just as entertaining or enriching. 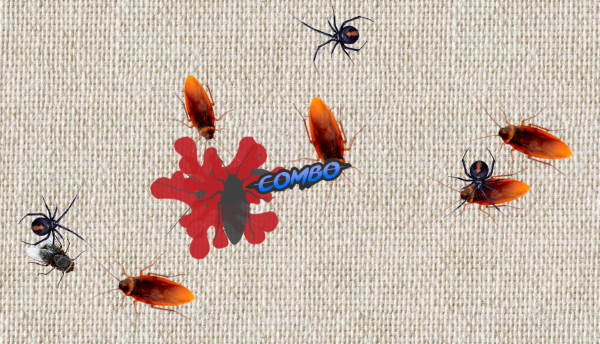 Python, C++, and HTML5 are a bit more raw than the specifically crafted engines like Source or Havok on which games like CS:GO and Destiny 2 were developed, but as this list is about to show, it doesn’t mean you have to settle for making a lesser game. In the conventional sense you won’t be able to output stunning vistas or jaw-dropping skyboxes, but your game can impress and amuse in more inventive and authentic ways than fancy graphics ever could.

Today, we’re specifically looking at games that were built using HTML5, and we’ve cherry picked some real treats that you can play right now.

While it’s hardly revolutionary in this day and age, Bejeweled still plays and holds up well even now, and while many people today may know it as one of the original mobile games that was eventually superseded in popularity by Candy Crush Saga, Bejeweled started life as a Browser game back in May 2001 before being ported to a number of different devices. This porting frenzy led to it being written in HTML5 and made available in the Google Chrome Store for free in 2011. 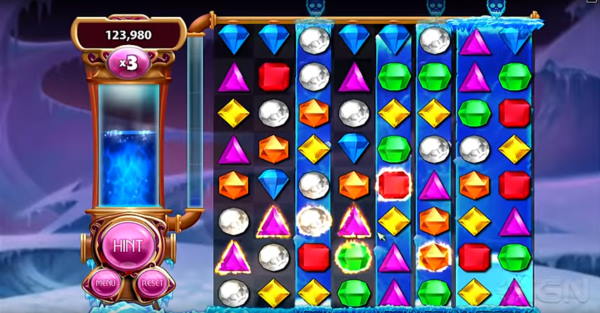 If you’ve been cryogenically frozen for the last twenty years and need a run down of Bejeweled’s gameplay, the game requires you to match up 3 or more corresponding tiles by swapping the tiles around and earning enough score to reach the next stage. It also has a time trial mode where the player has to keep matching tiles together for as long as possible, each successful match up adding more time.

It certainly doesn’t reinvent the wheel in terms of its gameplay, but within the simplicity of Bejeweled is where you’ll find its charm and appeal. It’s the perfect game to pick and play to pass the time if you’re on a train journey, stuck in an airport, or just want a background game to play while you’re working from home like a vast majority of the world is at this current moment in time.

Similar in style to the archetype of the countless endless runners that litter the iOS and Android store in the modern era, the airborne jewel collector Swooop has a one-dimensional and playful face, but becomes increasingly more addictive the longer you play it. 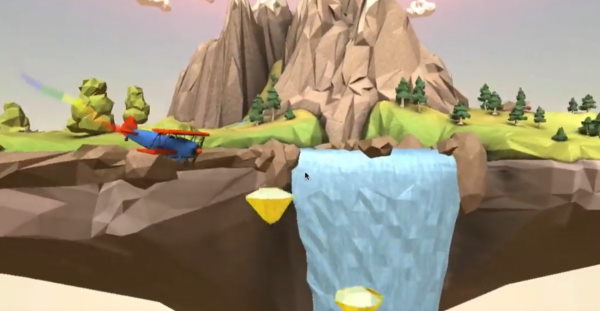 The goal is simple: you pilot your biplane and control the pitch using the spacebar. You collect the various different gems to score points while avoiding crashing into hazards that lower your fuel (which also basically acts as your health), all the while collecting the specific items that refill your constantly depleting fuel/health so you can keep flying, increasing your chance of getting a high score.

Swooop certainly isn’t flashy, but it doesn’t intend to be. It could easily be dismissed as just a game for kids with its marshmallowy graphics and one-button control scheme, but that’s really not fair to the game. While nowhere near as difficult as arcade games from the 1980s that were champions of Bushnell’s Law, there’s an odd seed of compulsion that the game implants within your brain shortly after playing it.

It’s precisely because it looks so easy that it makes you want to play it. You’ll take a peek at someone’s PC, see their score and think “I can beat that…”.

If you want to fly high in the sky with diamonds, you can find it on playcanvas here.

A tongue-in-cheek shooting mini-game that marks the end of one of the greatest operating systems of all time (which is not up for debate by the way), Escape From XP was essentially a brilliant piece of marketing that made everyone fully aware that the end was nigh for Windows XP and it was the end of days for Internet Explorer 6. 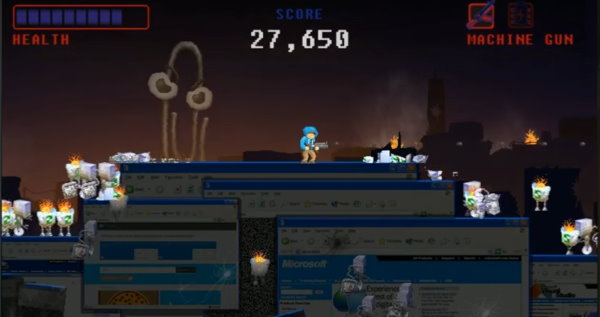 They’ve even gone as far as to add exposition to the proceedings; you play as a single developer clinging to life and existence on the barren wasteland of Windows XP. He seeks to escape the armageddon of the OS to end this madness once and for all. You can’t say Microsoft doesn’t have a sense of humour about things at the very least.

The game is a short survival run and gun, where you play as the aforementioned developer who has to escape from the self-destructing landscape. You’re faced with a constant barrage of desktop icons including the My PC, Internet Explorer and Recycling Bin shortcut images that saunter towards you in a zombie-like fashion. You blast your way to the extraction point while trying to get as high a score as possible. Plus it’s all set to an 8-bit dubstep soundtrack.

You also have the Microsoft Paperclip looming in the background with an evil look on his “Can I Help You?” face.

It had a limited official release and was retired once it had served its purpose, but it’s been preserved in many locations, one of which can be found here.Super Treasure Arena

Created by Vennril and published by HeadupGames, this is a mix of pixel based retro visuals that will whet the appetite of anyone that grew up on a steady diet of Super Nintendo, Atari 2600, and Sega Mega Drive games, along with the frantic brawling action of a modern day dungeon crawler.

To give a little more clarity to the context of the game, you pick from one of the five available characters: Warrior, Rogue, Ninja, Mage, and Mystic, all of which have their own unique ability like the Warrior being able to form a force field around him to resist damage and battle other players as well as the CPU characters and monsters for the dungeon’s loot. The winner is the person with the most loot when the time expires.

You can fight locally or challenge up to four other players online, but you’ll always come up against minions like skeletons, bats, zombie knights, and balls of slime as well as CPU controlled hero characters. There’s a number of special weapons that spawn to help you take out your opponents and swipe their coveted loot, along with your character’s unique power that can get you out of a tight spot.

Super Treasure Arena is a battling collect-a-thon that really taps in to the nostalgia factor while giving you fast-paced gameplay that shows what talented individuals can do in this particular coding language.

Coming from the same school of design and more than likely taking a good amount of inspiration from Arkanoid, Sketch Out sees you playing as an intergalactic paddle (his first role since Pong I assume) that has to defend your planet from a constant hail of asteroids, but with an extra layer that brings a new twist to the game structure. 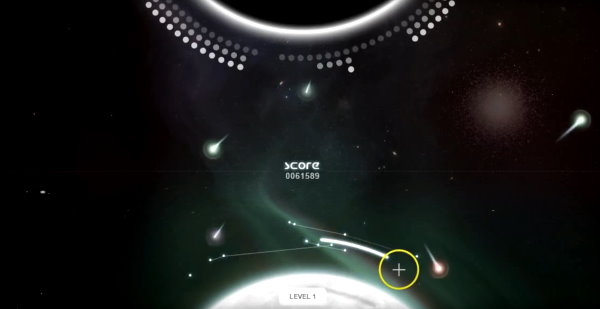 As mentioned, you play as a simple paddle looking to shield your planet from a litany of flying rocks that randomly disperse from the planet opposite you. Using your mouse to control the location of the paddle, you have to deflect these comets back to the other planet and hit the inner core of it to destroy it, thus progressing to the next level where the asteroids are fired faster but earning you score quicker.

You also have the ability to click with your mouse and create an extra wall that will serve as either extra protection or allow you to cover one side of the planet passively while you patrol the other.

As the game ramps up, it increasingly tests your reaction speed as well as your tactical place of your barrier of stars. A common theme among all these games is their power to create more compulsive gameplay that keeps you coming back for more, probably in part due to their incredibly easy control scheme.

To defend a planet near you, play Sketch Out here.

Another fantastic game that nails its tone perfectly by point blank refusing to take itself too seriously, The Wizard (not the 1989 film about Super Mario Brothers 3) is a game that dances merrily with the humour woven into its DNA while still being a stellar game in a mechanical sense at the same time. 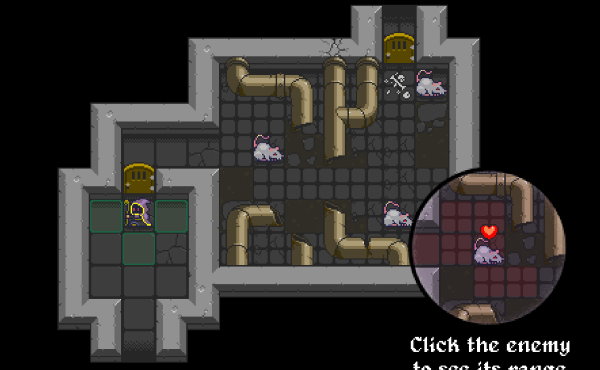 The story goes that one night a powerful wizard named Kevin awakens to find his face (yes, his literal face) has been stolen by a rival wizard, and he embarks on a hot pursuit to track down this villainous foe and retrieve his beautiful face. He gives chase through numerous dungeons filled with classic fantasy enemies like giant rats and warrior skeletons, his goal to make it to the exit and eventually squaring off against the evildoer himself.

The game is a turn-based dungeon crawler where you move your character one tile at a time and any enemies that become aware of you then move after you. You defend yourself with spells that can be upgraded through experience gained from completing each level and defeating enemies. As you progress, more varied spells are added to your arsenal as you face greater threats and there are three levels of difficulty: Novice, Adept, and Master, each one affecting the amount of XP you are awarded as well as the vitality of the enemies encountered.

The Wizard’s playful tone may make you think it’s a joke game, but it couldn’t be farther from it. It’s a fully fledged, well thought out game that delicately walks the tightrope of being funny and being a really made piece of interactive entertainment.