You might have heard the news that the Rubik’s Cube World record was broken by Yusheng Du in 2018, who solved the cube in 3.47 seconds on an official cubing competition. Watch the record breaking video under the link above. You can barely see his fingers moving.

Now that the Christmas holiday season is on its way and this is the time of the year when many people receive Magic Cubes as gifts, we’re dedicating an article to the online Rubik’s Cube solver which might become handy if you’re stuck solving your twisty puzzle.


Start the Rubik’s Cube solver here and watch the video above on how to use it.

The Rubik’s Cube has been around for more than 40 years now and it has become the World’s best selling puzzle toy since its invention with an estimated 400 million sold pieces. This little colored cube changed the World, giving us many confused hours trying to figure out how to unscramble it, but most of us could only fix one side of the six. This is where the average person gets stuck, because when we move forward to solve the next layer we always break the pieces already in place.

There are methods to solve the Rubik’s Cube which divide the puzzle into layers, going from the bottom layer to the top applying algorithms in each step that affect only the remaining cubelets, not breaking the pieces already in place. The most popular Rubik’s Cube solution method solves the cube by starting with the white cross, then solving the white corners, middle layer edges, yellow cross on top, yellow edges, positioning the last layer corners and finally orienting the yellow corners. To learn to solve the puzzle by ourselves we have to memorize the algorithms for each case. For the beginner’s method we would have to learn approximately eight series of rotations but if we want to become “speedcubers”, the advanced Friedrich (CFOP) method requires much more memorization and practice.

If you don’t fancy learning all the algorithms the good news is that there’s an online Rubik’s Cube solver program which can help you get your puzzle fixed. All you have to do is input the colors of the scrambled cube and hit the solve button. The program will show the moves you need to apply to get the cube solved. Follow the instructions carefully because you end up with a jumbled cube if you miss a single turn.

Check out the Rubik’s Cube solver! 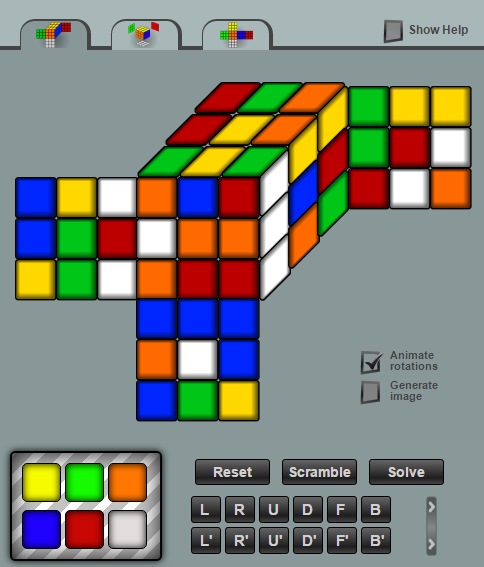